An Elegy to a Big Man 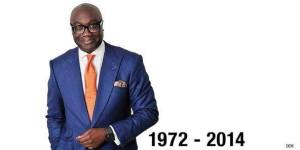 A big heart, a big mind, a big smile

A big man, on a big stage, a big dance

You lit up the world stage with

You nourished our heads with

You played your part and lifted all with

You left the stage with all still

A big heart, a big mind, a big smile

A big man, a big stage, a big dance

I have been reading an astonishing story in African Spotlight about a South African pastor making members of his congregation eat grass and, on other occasions, stepping on them.

It is a staggering account of religious submissiveness gone to unfathomable levels of, for lack of a better word, stupidity. How one man, acting alone or in collusion with similar-minded individuals, can get a large congregation of adults- with fully developed mental faculties, I suppose- to perform such degrading herbivorous acts as eating grass, is something that only the field of Psychology can explain with a relative degree of precision. Since my grasp of human psychology is no where near that of Sigmund Freud or B.F. Skinner, I will limit my commentary on the implications of such acts in the context of what I have read or observed, and my own fears which, I can say, are not entirely unfounded.

The same man, the story goes, steps on the prostrating members of his congregation.

Rewind the clock to March 17, 2000, when some 1000 unsuspecting villagers, in the western Ugandan district of Kanungu, found themselves huddled up like sheep in a securely locked church before their quack prophet, Joseph Kibwetere, set the edifice ablaze. It was a story that shocked the world at the turn of the new Millennium as eyes were, once again, riveted upon Uganda, which was already in the news for mass atrocities committed in the then raging LRA war in the north and the plunder of wealth in eastern Democratic People’s Republic of Congo (DRC) by the military and top government officials.

However, that horrendous story did not begin on the 17th of March. It had been developing; with Kibwetere and his accomplices like Credonia Mwerinde asking people to sell all their earthly possessions and take the money to church, in anticipation of an apocalyptic end in the year 2000. They did. They held a big feast and said their goodbyes to friends and neighbours, as they sang and prayed in anticipation of the D-Day. With his Movement for the Restoration of the 10 Commandments, Mr. Kibwetere had mentally ensnared his followers who just did as he commanded because, in their limited understanding of the world outside their village and pious minds, he was a man who talked to God and heard conversations between Jesus and the Virgin Mary. They were an easy catch.

Before Kibwetere, there had been other deaths, premised on cult followings of astounding degrees of folly. In 1978, a man named Jim Jones had done a similar thing, when he manipulated over 900 members of The People’s Temple to move to Guyana in South America, where all but a few would meet their demise in a ghastly episode of suicide and murder, in what came to be called the Jonestown massacre. Some, I have read, did take the lethal concoction out of fear of reproach from Mr. Jones, while the majority were fully convinced about what they were doing and would not be stopped.

There have been other bizarre accounts, including that in Tanzania in 2008, when some 50 members of Waadventista Wasabato Masalia (roughly translated as Remnants of the Seventh Day Adventists) packed their wares and, with no passports, air-tickets or visas, walked to the Julius Nyerere International Airport, ready to miraculously be flown to Europe on a preaching mission. Their Bibles, they believed, were their ticket to any place, including heaven.

Members of Tanzania’s Sabato Masalia walking to the airport. Photo courtesy of charaz.blogspot.com

I could cite other examples of such disturbing occurrences, but I hope that, for illustrative purposes, these will suffice. That the church in South Africa can do this now is both shocking and frightening, yet this is not an isolated example of people using religion to manipulate others or extort money from unsuspecting believers. For purposes of comparison, it could be argued that Pastor Daniel Lesego of South Africa’s Raboni Centre Ministries is a man that falls in the nomenclature of Kibwetere, Jones and the head of the Tanzanian denomination. The way these men, in their very unscrupulous ways, get people to act this way- as if by a spell- and no one acts until it is too late, is what is even more baffling. The lack of preventive action could, understandably, be a result of states not wanting to interfere in the way people worship, as a part of guaranteeing freedom of worship. It could also be out of fear of a political backlash, in the case of elected leaders, who may prefer to look to the next election with more urgency than to an impending doomsday for a few hundred individuals drunk on religious belief. 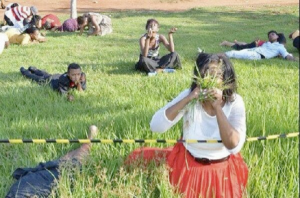 Karl Marx did say, in the context of the oppressed seeking some solace in it, religion is the opium of the masses. Taken literally and used in this context, one could say that religion, for the followers of such cults, has become a kind of drug that gets people drunk and hallucinating about heaven and such other imaginary things, while leaving them extremely vulnerable to abuse and extermination by self-seeking, heartless individuals. You may want to watch this incredible video of the same pastor. http://www.youtube.com/watch?feature=player_embedded&v=QCnhg_gEDjI